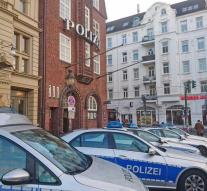 bremen - Unknown people in Bremen have a fifty-year-old man in his house robbed and beaten up, The attackers targeted a man they had seen on TV and according to his assailants had abused children. The victim was seriously injured.

The police in the North German city have no reason to believe that the man has anything to do with child abuse. His attackers are still without trace.