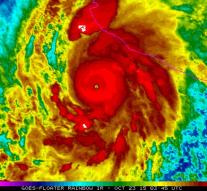 - Hurricane Patricia is the worst hurricane ever. The heavy storm that is heading for the west coast of Mexico, now already reached speeds of 325 kilometers per hour with estimated winds of 400 kilometers per hour. Worldwide, there were only two hurricanes with wind, said Weather Plaza in Hilversum.

Hurricane Violet reached in 1961 in southern Japan at a speed of 330 kilometers per hour. Record which is Nancy, also in 1961, south of Japan reached 345 kilometers. The storm Haiyan, which two years ago about the Philippines raged and 6300 deaths left, had a maximum measured speed of 314 kilometers per hour.

Authorities in Mexico have already Thursday declared a state of emergency. Patricia 's probably in the early hours of Saturday ashore. The storm rages over on top speed of over 335 kilometers per hour. Once over land, the wind decreases because of the mountainous terrain, according to meteorologists.

The coasts of the provinces of Guerrero, Michoacán, Colima and Jalisco should take account of heavy rain and waves up to 4 meters high. The authorities have warned the population to landslides and flooding.

Mexico was in 2002 for the last time hit by a severe tropical hurricane, Kenna. Which reached a maximum speed of 225 kilometers.