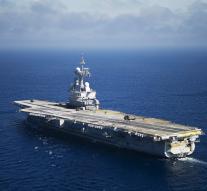 - France put the aircraft carrier Charles de Gaulle in the fight against Islamic State (IS) in Syria and Iraq. The office of President Francois Hollande has said that Thursday.

Normally, the carrier is accompanied by some frigates, a submarine and a tanker. The statement reiterated that Paris is behind the attempts to reach a political transition in Syria and that the current President Bashar al-Assad can play a role in the future of the country.