Home / Tech / Painting while you eat and drink 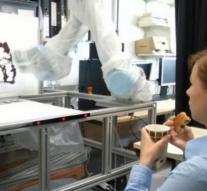 - According to several studies multitasking is an illusion. No one could perform two thought processes simultaneously. However, British scientists believe that performing multiple tasks at the same time is possible with the help of robots.

Scientists from Imperial College London have developed computer software that allows a person to control a robot arm with his eyes and a painting can make paints.

The technology allows the researchers show that robots can be used to help people to improve their skills and do more than one task at a time. Instead of a series of computer commands to be followed, the robot arm is controlled by a tracker that follows eye movements. An algorithm translates the look of the user then commands the robot arm.

Postdoctoral student Sabine Dziemian demonstrated last Wednesday in the Brain and Behavior Laboratory how she could make a painting while simultaneously drank ate a croissant and a cup of coffee. In response, let them know that the computer works very intuitive. She points out that she does not have to remember commands. "I just think of where I want to draw or what color I want to use. " By thinking of a color, users often look for that color, allowing the robot to pick up.