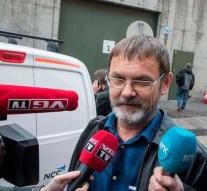 oslo - The Norwegian authorities released a Russian man on Friday suspected of espionage. He was stuck for almost a month. The Norwegian Police Security Service (PST) wanted to extend the pre-trial detention order, but the Oslo court rejected that request. The appeal of the PST was also unsuccessful.

Michail Botsjkarjov was arrested on September 21 at Oslo airport when he was about to leave the country. The Russian attended an international congress on digitization in the Norwegian parliament building and behaved suspiciously. He denied having done anything wrong. Moscow demanded his immediate release.

Although Botsjkarjov, who is supposed to be a staff member of the Russian senate, is flying home on Saturday, the matter regarding the Norwegians is not resolved. The PST announced that it would continue with the investigation.