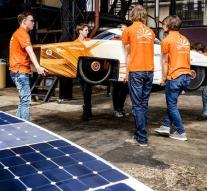 darwin - Take on the Dutch (take it against the Dutch). That's the motto of the World Solar Challenge, a race with cars driving on solar panels through Australia. The student contest begins Sunday. The Netherlands dominates the race for years. And this year gold is also in front of orange. 'Dutch dominance', according to the Australian contest.

In total there are about fifty cars from around 25 countries. The Netherlands is represented with three teams. TU Delft participates with the car Nuna9 this year. Students of the University of Twente have built the RED Shift. Both teams drive in the so-called Challenger class. Those are race cars. The TU in Eindhoven made the Stella Vie car for the Cruiser class. This group is for family cars. The jury does not only look at speed, but especially for practical use, such as the number of occupants and the battery consumption. Eindhoven thinks bonus points score with five passengers, more than competition.