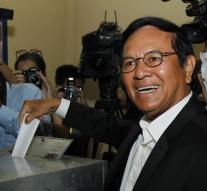 phnom penh - Cambodian opposition leader Kem Sokha is officially accused of treason. The case has been filed with the court in the capital Phnom Penh. He can get a jail sentence from fifteen to thirty years.

Sokha was arrested on Sunday with his bodyguards by a police force of between one hundred and two hundred men. He is suspected of collusion with the United States by the government of Prime Minister Hun Sen.

TV channel Fresh News says it has a video on which the opposition leader talks about shoveling the government of Hun Sen. He claims that he can count on the help of the US.