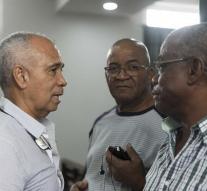 paramaribo - The Surinamese Public Prosecutor's Office asked Friday for a trial of Edgar Ritfeld, a suspect in the December murder trial. He urged himself through his lawyer to continue the process because he wanted to prove his innocence.

Ritfeld was suspected of having retrieved one of the later victims along with another soldier. The prosecutor, Auditor-Military Roy Elgin, declared against the so-called Military Chamber that no witnesses were found that could confirm that. Therefore, it can not be proved that Ritfeld was involved in the murders.

Elgin asked for jail for prison director Jimmy Stolk earlier Wednesday. According to the auditor-military, Stolk was able to do nothing else than follow a service order on December 8, 1982 and pick up one of the later victims. Nor would he have known what would happen to the people he had to pick up.

In the December murder trial, it is about torture and shooting in a military czarre of fifteen opponents of the then military regime in 1982, led by former army leader and current president Bouterse. Against him, in this case, he demanded 20 years celecia earlier this week for his share in the murder party.