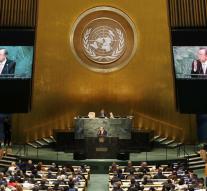 - The United Nations existed seventy years. Which is celebrated worldwide on October 24 by exposing 180 sites in more than fifty countries in the official blue of the UN. The Peace Palace in The Hague in the Netherlands the blue object. Which announced the UN.

To the world famous attractions include the Sydney Opera House (Australia), the pyramid at Giza ( Egypt) and the Empire State Building in New York (USA). The musem Hermitage in Saint Petersburg ( Russia ), Table Mountain in Cape Town ( South Africa) and the Tower of Pisa ( Italy ) Saturday are colored blue. Secretary-General Ban Ki-moon expressed his enthusiasm to welcome the world to participate in the celebration.

Blue celebration begins in New Zealand and Australia undulates then west around the world. The United Nations building in New York is highlighted as the only two days of blue, the 23th and the 24th.

The United Nations was founded by 51 countries in 1945. Currently the nation organization has 193 member states. The name United Nations came from the British leader Winston Churchill, who used it during World War II in a speech. Although he meant actually the allied forces, the name was later lead their own and new life.

The UN was the successor to the League of Nations. This organization was founded after the First World War with the aim of putting an end to all wars. Late thirties were 58 member countries. The organization was formally abolished in April 1946, when the UN took over all operations.

The goals of the United Nations since its founding next to the search for peace and security significantly expanded. The UN abide work includes improving education, health, climate, food, equality, poverty and sustainable development.