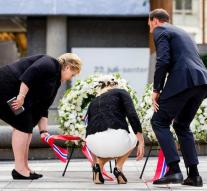 oslo - All of Norway mourns Friday to the victims of the massacre by Anders Breivik, identified by a double attack killed 77 people on July 22 2011. Both on the island of Utøya and in the government district appeared many visitors with flowers. Those are the two places where Brevik carried out his attacks. Prime Minister Erna Solberg, Crown Prince Haakon and Crown Princess Mette-Marit laid wreaths.

The then 32-year-old Breivik had his massacre prepared for years, he later explained. Gruesome but necessary, he called his acts against both Islam and social democracy. He had everything just prepared and executed. While Norway still mourned, the far-right killer was declared sane and sentenced a year later to 21 years in prison, the maximum sentence in Norway.