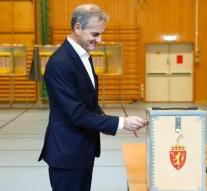 oslo - Around 3.8 million Norwegians have been called on Monday to vote for a new parliament. Surveys signal a neck-to-neck race between the Conservatives and Social Democrats.

In the last four years, Prime Minister Erna Solberg led a minority government of the Conservative Right and the right-populist party FRP, who received support from the Christian KRF and the Liberal Left. However, the Social-Democratic Labor Party under the leadership of Jonas Gahr Støre also plays a traditional role in the tradition.

Minority governments are common in Norway. There are, however, tensions between the small parties and the FRP. Moreover, it is unclear whether the Liberals reach the 4 percent threshold. The polling stations are open until 21.00. In about 170 municipalities, sunday could already be voted on.