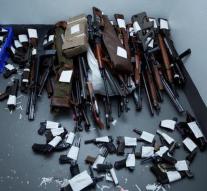 oslo - Police in the Norwegian city Hønefoss has a huge quantity of weapons seized, totaling about thousand units with associated ammunition. It involves heavy automatic rifles, revolvers and pistols. About twenty people were arrested. Two of them who were already arrested earlier, were found to have a stockpile of nearly six hundred firearms.

The investigation into this case began months ago and focused on suspects scattered across the country. The lawyer of one of the suspects told Wednesday at the Norwegian radio that his client is a collector whose hobby has gotten out of hand.