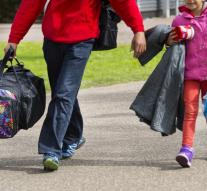 oslo - To manage the large influx of refugees in the right direction, Norway receives a separate Minister for Immigration and Integration. This made the government in Oslo on Wednesday. Previously, both parts were placed in two ministries.

Sylvi List Haug of the populist Progress Party, the immigration minister. She was hitherto agriculture minister in the center-right government of Prime Minister Erna Solberg.

Norway expects this year an influx of 40,000 asylum seekers. A few weeks ago the asylum law was tightened.