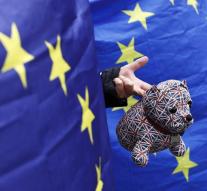 belfast - British Prime Minister may decide to leave the European Union without requiring the consent of the Parliament of Northern Ireland is required. The laws of the Northern Ireland province Brexit can not prevent.

That judgment was felling a Northern Irish court in the capital Belfast on Friday. The court considered an appeal of the activist Raymond McCord against the decision of the Prime Minister. McCord announced immediately after the decision to appeal to the High Court in London. 56 per cent of Northern Irish voted against leaving the EU.

Whether the current British Prime Minister Theresa May is entitled Article 50 to run the Lisbon Treaty without the formal support of the British Parliament, about currently considering a court in London. The oft-cited article 50 leaving the European Union shall take effect immediately.