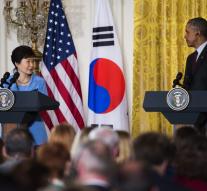 - North Korea is serious about ending its nuclear weapons program , the country is welcome at the negotiating table . US President Barack Obama and his South Korean counterpart Park Geun-hye expressed Friday in Washington unanimous: the door is open to North Korea's presidential leader Kim Jong -un .

The two presidents were Friday talks in the US capital. During a joint press conference after the talks, however, Obama was skeptical about the current intentions of Pyongyang.

However, one positive sign of North Korea can lead to alleviation of economic sanctions and improved relations.

In turn, President Park that South Korea is willing to take direct action to bring about a reconciliation with the northern neighbor.