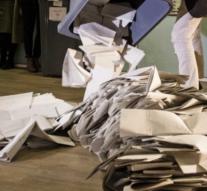 oslo - Norway takes additional measures to prevent chaos with results during the parliamentary elections of September 11th. For example, all government-issued votes must be counted one by one in addition to the usual scanning of ballot papers by computers.

Oslo emphasized that there are no indications that someone illegally tries to influence the outcome of the elections. Nevertheless, it is certain that it is uncertain. Thus, the authorities also improve the security of IT systems.

Previously, the French and American authorities suspected, among other things, that the Russians tried to influence elections. The Kremlin denies that.