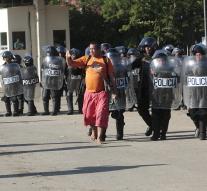 - The Central American Nicaragua has closed the border for hundreds of Cuban asylum seekers who were en route to the United States. Security forces Sunday sent refugees back that would have entered the country illegally from Costa Rica.

In Central America diving more and more refugees from Cuba, who travel to the US. They can now easily get asylum there, but many Cubans fear that there would soon come to an end by the rapprochement between Havana and Washington.

The refugees stream leads to tension between the countries in the region. Thus Nicaragua complains that Costa Rica is a " humanitarian crisis " triggers by sending a large group of Cubans. The country had this weekend over a thousand refugees provide transit papers after they were stopped earlier at the border with Panama.