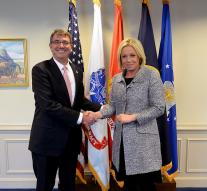 washington - America wants the Netherlands to do last for the bombing of IS in Syria. There is Monday made ​​an official request.

" A waiting attitude, we can not afford, '' said Mr Hennis (Defence) after her visit to her American counterparts Ashton Carter on the Pentagon in Washington. The minister spoke yesterday about an hour with Carter at the US Department of Defense. It mainly focused on combating Islamic State.

The two politicians concluded that IS must be united and determined reports. After the attacks in Paris, Egypt and Lebanon, the pressure for the anti-IS coalition increased to eradicate the jihadists as quickly as possible. " This threat affects us all. We must prevent divisions of IS settle elsewhere in the Middle East, Africa and Europe, '' Hennis said after her meeting.

" Has IS Through the efforts of the coalition lost ground over the last year in Iraq and Syria. But we need the power, and thus the appeal of IS further damage, '' said the minister.

Netherlands bombs from Jordan with F-16s IS positions in Iraq. The Americans would like to see our country in Syria IS takes under fire. The government has this under consideration. But first there will be greater clarity about the future of Syria and especially what to do with the Syrian dictator Assad backed by the Russians is. French President Hollande, who will visit today by President Obama, trying Moscow and Washington rapprochement each other in their fight against the IS- terrorists.