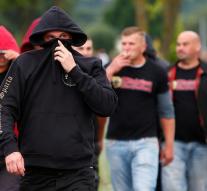 themar - More than 5000 fans of extreme right minded gathered in Themar on Saturday for the biggest neonazi concert of the year in Germany. The town with almost 3000 inhabitants in Thuringia was in a state of siege. Serious irregularities, however, continued, counter demonstrations too.

Three hours after the start of 'Rock against excessive foreign influence', the police, with a thousand men on their feet, still had a big run.

For security reasons, the organization had already expanded the festival area, but many visitors could no longer lose their car in the designated areas.

It did not appear necessary to keep protesters at a distance. Of the 2000 left-wing activists expected, only a few hundred appeared.

On the right side, too, was fairly resigned. Until the beginning of the evening, it remained with ten offenses by showing prohibited symbols. In addition, eight criminal offenses, such as insult and destruction, were committed under the influence of alcohol or drugs.

The concert lasts until midnight.