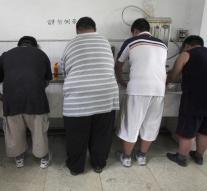 boston - By 2015, approximately 2.2 billion people, almost one third of the world's population, were overweight. Their body mass index (BMI, body weight in kilos divided by the square of the length in meters) was 25 or more. Of them, over 600 million adults and nearly 108 million children (2-19 years) received the diagnosis obesity. Their BMI was over 30. In seventy countries, including the Netherlands, that is more than doubling compared to 1980.

This is evidenced by a report published by the New England Journal of Medicine on Monday. The scientists analyzed the available data of 68.5 million people in 195 countries and observed a steady increase of obesity, which is currently unsuccessful. In many countries, the problem among young people also increases faster than among the elderly.