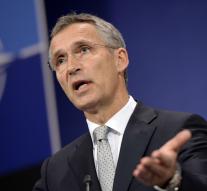 - NATO may send troops to Turkey if necessary to help defend the southern border. This was said Thursday NATO chief Jens Stoltenberg shortly before a meeting of the defense ministers of the Alliance.

At the weekend, a Russian fighter aircraft violated the airspace of Turkey. Turkey has since repeatedly made ​​mention of incidents in the airspace over the Syrian border.

Stoltenberg is also concerned about fighting cruise missiles which Russia since Wednesday from naval targets in Syria bestookt.De NATO chief has the Kremlin Thursday recalled or Islamic state , but to keep defending the regime of President Bashar al- Assad. British Defense Secretary Michael Fallon said the only useful thing Russia with Assad can do is convince him not to bombard citizens .