Home / World / Nationalist leader: Catalonia is not yet ready 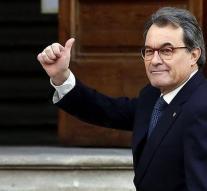 barcelona - Ex-Prime Minister Artur Mas of Catalonia warns that the region is not yet ready for 'real independence.' He said this in a questionnaire with Financial Times (FT). Mas was government leader from the end of 2010 until the beginning of 2016. He is one of the most important figures behind the current wave of separatism in the region.

It was especially the liberal Mas who placed the separation of Spain at the top of the political agenda against the background of the severe economic crisis and corruption scandals. 'There are still some things missing to make independence real,' Mas said. He misses, for example, 'own tax collection system, own judiciary and control over the entire territory. '