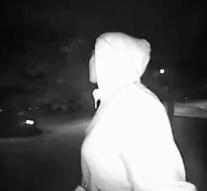 houston - The riddle around a chilling video of a woman who was dragged barefoot and with chains around her body in front of the door of a house has been solved.

The 32-year-old victim was found alive, but her friend turns out dead.

Last week the police released the images of a doorbell camera with the call who recognized the woman. On the picture you can see that a woman who rings in a panic with someone seems to be seeking help. Then a car stops behind her, a man runs out and then laps her away.

After the police spread the images, the ex of the man reported.