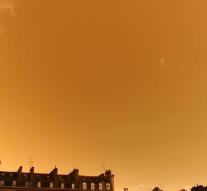 dublin - In Ireland, Great Britain and France, the heavy storm Ophelia left a mysterious warm glow after heaven on Monday night. Parts of the countries were shrouded in an orange light, causing ash particles and Sahara sand that stormed on its way to the north.

The ash particles originate from the extensive forest fires in Portugal and northern Spain. The light of the evening sun was fragmented by the sand and ash particles.

The scene produced nice pictures on social media: and without any use of an Instagram filter.

Ophelia followed a different course. Most people follow a path across the northern Atlantic. Ophelia, however, came from the southwest.