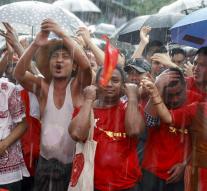 naypyidaw - President Thein Sein von Myanmar said Wednesday that the transfer of power in the country will be peaceful. He spoke with opposition leader Aung San Suu Kyi, who convincingly won the election on November 8 in the Asian country.

The National League for Democracy Party (NLDP) of Nobel laureate Suu Kyi won the first elections in a quarter century. The military- backed party, the president had no chance. Suu Kyi, however, can not the military power block. After her meeting with Thein Sein, they spoke with the highest military of Myanmar, General Min Aung Hlaing.

The septuagenarian Suu Kyi was for years the only political force in which the military government had to take into account. After a coup in 1962 ruled the military continuously. The NLDP also won the 1990 elections, but his victory was ignored by the powerful army. Since 2011 there has been a break in the relationship between government and citizens. Moreover, the government agreed to economic reforms, which resulted in an annual growth of 7 percent. The international sanctions against Myanmar have been alleviated.

Suu Kyi won its policy of violence against the regime in 1991, the Nobel Peace Prize. Despite its resounding victory Suu Kyi itself can not be president. A law from the time of the junta prohibits people who have children with a foreign passport. Suu Kyi's children were born in Britain.