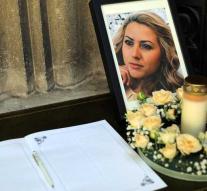 celle - The twenty-year-old man suspected of the murder of the Bulgarian journalist Viktoria Marinova admitted to the German police that he had attacked her. But the Bulgarian denies having raped, robbed and robbed the thirty-year-old TV presenter.

The defendant stated that he had beaten Marinova in her face last weekend and then thrown into the bushes. He committed the attack in a park in the Bulgarian city of Roese, which he claims is strongly influenced by alcohol and drugs. He did not know her and claims that his outburst of violence happened. The suspect fled to Germany, where he was arrested.

According to the PPS in Lower Saxony there are no indications for political motives behind the murder. The Bulgarian will probably be delivered to his home country within a few days. According to the Bulgarian police, DNA evidence indicates his involvement. Furthermore, he would have stolen the telephone and jewelery of the journalist.

The woman was jogging in the park, in preparation for a marathon.