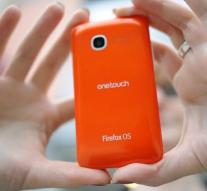 orlando - Mozilla's own mobile operating system Firefox OS is not a success. Therefore the company will stop the sale and development of the software. Reported TechChrunch.

" We were not able to provide the best user experience possible so we stop offering Firefox OS smartphones ", as was informed in Orlando at the developer event of the company, Mozlando. " We are proud of the benefits that added the operating system to the web platform and we will continue to experiment with the user experience. "The software was launched in 2013 with the company focused mainly on users of cheap phones. The software is light and focuses on the use of the web and relies less on apps. However, sales of phones with the software was disappointing.
NEW