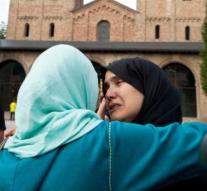 barcelona - The mother of the chief suspect of the terrorist attacks in Spain called on her son to surrender.

Younes Abouyaaquoub has to report to the police, the Catalan radio channel Televisió Catalunya i Catalunya Ràdio quotes on Twitter the woman. The 22-year-old Moroccan is fleeing and may have moved to France.

During a meeting on Saturday evening for the town hall of Ripoll, about one hundred kilometers north of Barcelona, ​​about forty relatives and acquaintances of the suspects distanced themselves from the terror attacks in Barcelona and Cambrils. They carried posters with the words 'Not in our name'.

In Ripoll some of the suspects lived. The Catalan police are currently investigating according to various media reports whether an imam was the leader of the terrorist cell.