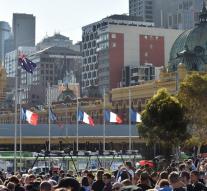 antalya - In the Turkish resort of Antalya arrested a Moroccan Belgian. Ahmet Dahmani was commissioned by the State Islamic sites in Paris have figured out where Muslim extremists last week massacres. It has a Turkish government official said Saturday.

The 26-year-old Dahmani was arrested in a five star hotel in Antalya, where he stayed since November 16th.

On a highway near the Turkish resort are two men arrested, both Syrians. They would be sent by IS as security guards for Dahmani.