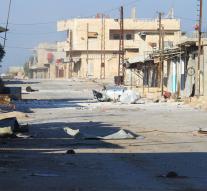 Officially Tehran advises only Assad's forces, but there have long been indications that members of the Revolutionary Guards to fight alongside the Syrian army.

Shiite Iran has always been an ally of the regime of Assad. The Assad clan belongs to a minority which adheres to a faith rooted in Shiite Islam . Islamic State , the largest rebel group in Syria , is a movement of Sunni extremists.