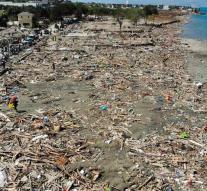 jakarta - The Indonesian authorities supply relief goods and materiel after the earthquake and flood on Sulawesi. The emergency response service says it needs more heavy equipment and manpower to store bodies on the island.

The natural violence caused an enormous havoc in the area last Friday. According to official figures at least 844 deaths are regrettable, but in the media there are already talked about more than 1200 fatalities.

Probably many people are still lying under the rubble of collapsed buildings in Palu, a city with about 380,000 inhabitants. There, too, most of the people were killed. The authorities are forced to bury bodies in a mass grave after identification. There may also be hundreds of people stuck in villages that have been hit by landslides.

The supply of relief goods for survivors also comes up against problems. Some people have been plundered according to Indonesian media to get food. Agents and soldiers have been deployed to monitor filling stations and supermarkets. President Joko Widodo says Monday that as much food aid as possible is sent to the island with military transport aircraft.