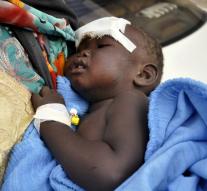 juba - A girl of 14 months survived the plane crash in southern Sudan. Rescuers were able to get the baby alive under the wreckage of the Russian unit from.

A government spokesman says that not only the child, Nyloak Tong, but two passengers survived the disaster Wednesday. According to initial reports, there are at least 41 deaths.

It crashed just after taking off from the international airport of South Sudan in Juba. "We have secured the scene of the crash and are now working on the recovery of the bodies and the black box," said Stephen Warikozi, the director of the local aviation authority. He could not give exact figures on the number of victims.

Reuters reports that a witness has 41 bodies lying under sheets show. A policeman, who refused to give his name because he was not authorized to talk to the media, confirmed that number. Other witnesses speak of at least 32 deaths. A government spokesman said he expected that given the high number of victims also people on the ground were killed.

The Antonov-12B, a propeller plane, including six crew members had eighteen people on board. The aircraft was leased by the local carrier Air Services and was on his way to Paloch, in the north of the country. Five of the crew were from Armenia and one from Russia, all the other passengers were from South Sudanese origin.