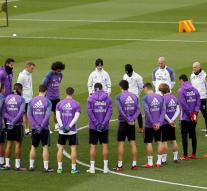 barcelona - Several football clubs on Tuesday held a minute's silence for the victims of the plane crash in Colombia, where a large part of the selection of Chapeco Armenian was killed. Include FC Barcelona and Real Madrid were before the training discussed the tragedy near Medellin. The two Spanish superpowers are Saturday clash at Camp Nou, but on Wednesday both first stand a cup match on the program.

Dozens of clubs and players, also from the Netherlands, on Tuesday expressed their condolences to the victims and survivors of the air crash. The Brazilian team Chapeco Armenian was heading to Colombia for the first clash with Atlético Nacional in the final of the Copa Sudamericana when the plane containing the selection crashed. Only three players survived the crash.

Read the complete story with the latest updates.