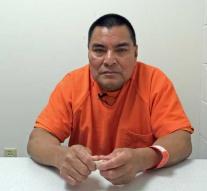 guatemala city - A court in Guatemala has sentenced a former soldier to 5160 years in prison for the mass murder of 171 people. The massacre is seen as one of the most cruel crimes in the civil war that plagued the Central American country from 1960 to 1996.

According to the prosecutors, Santos Lopez participated in the mass murder in the village of Dos Erres in 1982, where almost all men, women and children were killed. Lopez was part of an army elite unit that had been sent to the village to eliminate members of a guerrilla group.