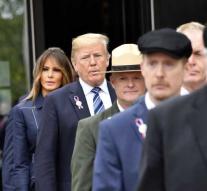 shanksville - In the presence of the American President Donald Trump and his wife Melania, the attacks of September 11, 2001, were commemorated in Shanksville.

That day, plane hijackers flew with planes at the World Trade Center in New York and the Pentagon in Washington. A fourth aircraft, headed for the American capital, crashed near the town of Shanksville after occupants had overpowered the hijackers.

That was when the United States 'fought back' against terrorism, Trump told his listeners in the state of Pennsylvania. 'They fought to the bitter end. And they stopped the forces of evil and defeated this bad, terrible and evil plan. '

Trump also addressed the sacrifices that have since been made in the fight against terrorism. According to him 5.5 million people have taken service in the armed forces. More than 7000 'died to stop the danger of radical Islamic terrorism. '

Vice President Mike Pence attended a memorial service at the Pentagon on Tuesday.