Home / World / Migrants only at five locations in Germany 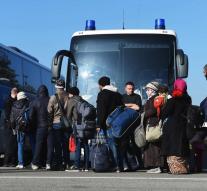 passau - Refugees who wish to Austria from Germany, from Saturday to only five places to cross the border. In which five border crossings be equipped special checkpoints. The German government on Friday it reached an agreement with the Austrian authorities. Thus, the influx of immigrants from Austria should go smoothly orderly.

The south German border towns of Passau and Wegscheid be some time flooded with refugees. They are in their thousands by Austria put down at the border. That led to sharp criticism earlier this week from Germany.