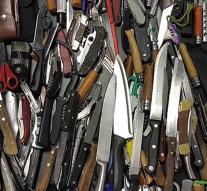 london - The British police arrested 39 people after a stabbing in the west of London. A man was stabbed in the Hammersmith district in the early hours of Monday and fights for his life.

According to the London newspaper The Evening Standard, the arrests took place on a site near the stabbing.

Messengers are a growing problem in the British capital. In October it became known that the number of stabbings had risen to a record high by 15,000 incidents in one year.