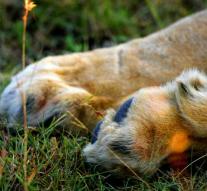 north carolina - A lion who killed a 22-year-old trainee from the Conservators Center in North Carolina was shot dead. The police tried to calm the animal but that failed.

A sheriff then decided to kill the animal. Alexandra Black graduated from the University of Indiana two weeks earlier and has been working as a trainee at the zoo since then. With her undergraduate degree in the behavioral sciences of animals she eventually hoped to become a carer.