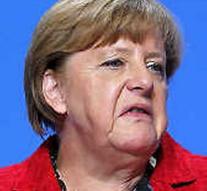 - German taxpayers will not foot the bill for the costs incurred by the government for accommodating the hundreds of thousands of refugees. That Chancellor Angela Merkel said Sunday in Berlin .

Merkel said the strong German economy is the reason for that decision. She gave her word that taxes not be increased. The Süddeutsche Zeitung reported on Saturday that both the German Government and the European Commission wanted to impose a kind of solidarity tax. That suggestion was denied by Brussels.