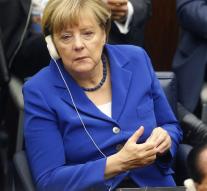 - German Chancellor Angela Merkel said Tuesday that require a bundle of national and European measures to resolve the refugee crisis.

" We take national steps, a bundle of measures, from transit zones to a rapid implementation of laws and above deportation of asylum seekers who have been rejected requests to intensify ", said Merkel prior to a regular meeting with Conservative MPs in Berlin.

Merkel 's Christian Democrats (CDU) and its Bavarian sister party Christian Social Union (CSU) came last weekend agreed transit zones set on the border with Austria. Migrants who do not claim asylum can be denied admission there. But their Social Democrat (SPD) coalition partners have yet to support the plan.