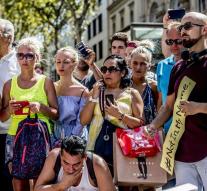 barcelona - Barcelona wants to protest a major demonstration against terrorism and extremist violence next Saturday.

Mayor Ada Colau and Catalan Regional President Carles Puigdemont have made this call to the citizens of the city, the newspaper La Vanguardia reports Sunday.

The demonstration is under the motto 'No tinc por', Catalan for 'I'm not afraid'. This sentence was pronounced soon after the attack on the Ramblas boulevard. Since then, it is a symbol of the resistance of the population and their will not to be intimidated by terror.

The demonstration begins at 6 pm and ends at Plaza de Catalunya, from which a terrorist with a van will raise the pedestrian area of ​​the Ramblas.