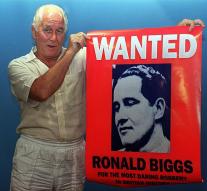 mojacar - Gordon Goody, the mastermind behind the Great Train Robbery in 1963 in Britain, is deceased Friday at the age of 86. According to British media Goody died at his home in the Spanish resort of Mojacar, where he lived for more than thirty years.

Goody was sentenced to a term of thirty years, but he already came in 1975 at large. The former hairdresser was one of the last survivor of the gang.