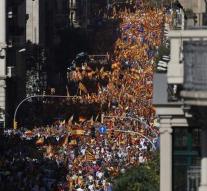 barcelona - Tens of thousands of supporters of Spain's unity pull through Barcelona on Sunday. They express their concern about the planned separation of the Catalan government.

'To the prison with Puigdemont!', Is one of the slogans during a major demonstration. It is loudly applauded by a balcony with the Spanish flag. 'No estais solos', call the protesters. 'You are not alone'.

'No CatXit' boards are kept up. And a plate with '155 ya'. By deploying Article 155, the Spanish Government could lift the autonomy of Catalonia.

The protest is organized by civil society organizations. The referendum voted for an overwhelming majority of more than 90 percent for divorce, and the Catalan Parliament plans to call independence this week to the fury of the central government in Madrid.