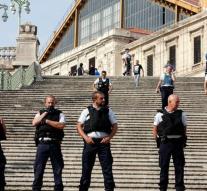 marseille - One man stabbed two women at a train station in Marseille on Sunday. Soldiers shot the attacker there, report the authorities.

The perpetrator would have called 'Allahu akbar' (God is great) while knocking on a knife to passers-by. The police called on people to stay away from Marseille Saint Charles, the main station in the southern French city. Minister Gérard Collomb (Home Affairs) told Twitter to go straight to the train station.

One witness told Reuters that she saw a man pulling a knife from his sleeve. Then he first put a young girl and then another woman. Then soldiers arrived at the train station.

According to sources within the police, the two victims were seventeen and twenty years old. The perpetrator would have stabbed one of his victims in a stomach and the other woman cut the throat.

About two hundred agents locked away from the train station after the attack. The authorities called on people to stay away from Marseille Saint-Charles, the main station in the southern French city. President Emmanuel Macron later expressed his horror about the "barbaric act." Counselor known to the police

The perpetrator was a well-known police officer. Nothing has been disclosed about his identity. The anti-terrorist department of the Paris Public Prosecutor's Office launched an investigation.

The attack in Marseille was only hours after the attack in Canadian Edmonton. The police arrested a suspect after an attack on an agent and several pedestrians. The authorities confirmed, according to Canadian media, that a flag of terrorist organization Islamic State has been found in a car used in an attack.

In recent years, France has been frightened by major terrorist attacks. For example, in 2015, 130 people were killed in a series of attacks in Paris. In Nice last year 86 killed when a man with a truck entered pedestrians.