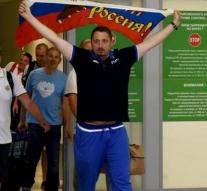 toulouse - The infamous Russian hooligan leader Aleksander Sjprygin, who was deported from France after fans riot in Marseilles, was arrested again Monday at the European Championship match Russia against Wales. Sjprygin himself expressed no harm aware and pointed out that he can travel freely within the European Union and had a ticket.

Sjprygin was caught because he posted on Twitter selfies from the stadium in Toulouse, French media report.