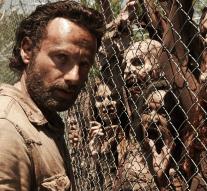 albuquerque - A man in the US state of New Mexico who had looked at the popular TV series The Walking Dead, his friend was beaten to death because he thought that would be a zombie.

The 23-year-old Damon Perry fell under the police are equally old friend Christopher Paquin to fear that it was his turn to be a 'living dead'. He kicked and hit him and attacked him with sharp objects and things like a guitar and a microwave.

The two men had sat binge watchen ' in episodes of the series, which is about a post-apocalyptic society that is threatened by hordes of zombies. " Perry said he had drunk too much change when his friend started a zombie ", a police spokesman said Monday. He added that the killing " one of the most bizarre and ghastly " ' was he knew.