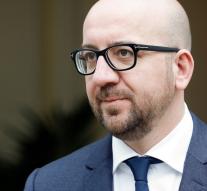 brussels - A man who apparently can not stand lights flashing, drove last Wednesday with his car in the convoy of Belgian Prime Minister Charles Michel. The incident was at the end of the afternoon on the road from Brussels to Louvain-la-Neuve, reported the newspaper La Dernière Heure Wednesday.

The man would not have targeted the prime minister, but " was fond of all beacons ". It is caused by a known police disturbed man who calls himself an anarchist and earlier problems with police cars. The security of the prime minister knew him to finally move his car to turn side and the police arrested him.

Monday rode a confused man at the entrance to a barracks in the Walloon Flawinne near Namur. The 32-year-old man was arrested a short time later and was transferred to the psychiatric ward of a prison.