Home / World / Maldives gets out of Commonwealth 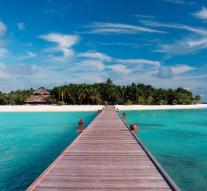 malé - The island state of Maldives gets out of the Commonwealth. The country is angry about a warning from the organization that it falls short in terms of democracy and the respect of its legislation.

The small archipelago is primarily known as a tourist paradise. Politically problems arose in 2012 when the democratically elected leader Mohamed Nasheed, the country was expelled. Since then, the unrest in the Maldives. The foreign minister said Thursday that the decision 'difficult but inevitable' had been.

The current rulers believe that the Commonwealth's progress on democratic land area, does not want to see. What is not is helping them that included the death penalty was recently reintroduced, which is particularly called by human rights groups much resistance.

The Commonwealth of Nations is a group of 53 independent states (including the Maldives), mostly former British colonies and mandated territories. Britain's Queen Elizabeth is the symbolic head of the organization. Maldives lies in the Indian Ocean and has about 350 000 inhabitants.