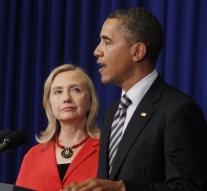 - The White House makes mail exchange between President Barack Obama and former Secretary of State Hillary Clinton did not publicly. The e-mails are subject to the Presidential Records Act, a law that regulates the confidentiality of presidential documents.

The e-mails are made ​​public at the earliest if Obama is not president anymore, says an official at the White House.

Republican opponents of Clinton, who preys on the Democratic candidate for the presidency, want all their emails are public. They insist on it in the context of the investigation into the attack on the US consulate in Benghazi (Libya) in 2012, where among others the US ambassador was killed. Clinton and Obama have failed in the protection of the consulate, say the Republicans.