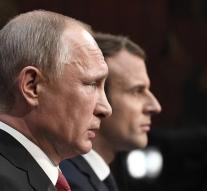 versailles - France and Russia aim for a peaceful meeting in the so-called Normandy talks in the peace process for Ukraine's crisis-plunged Ukraine. In this informal group, Germany and Ukraine are also represented. The new president of France, Emmanuel Macron, announced this after a meeting with his Russian colleague Vladimir Putin in Versailles, Paris on Monday.

There is a desire to come to a de-escalation of the conflict within the framework of the Minsk peace agreement, Macron said. This plan was established in February 2015 by Macron's predecessor François Hollande and Chancellor Angela Merkel.

But a repeatedly declared ceasefire or the withdrawal of heavy military equipment have been carried out so far. For more than three years, government forces have been fighting against separatists supported by Moscow. The UN estimates that about 10,000 people were killed in the conflict.